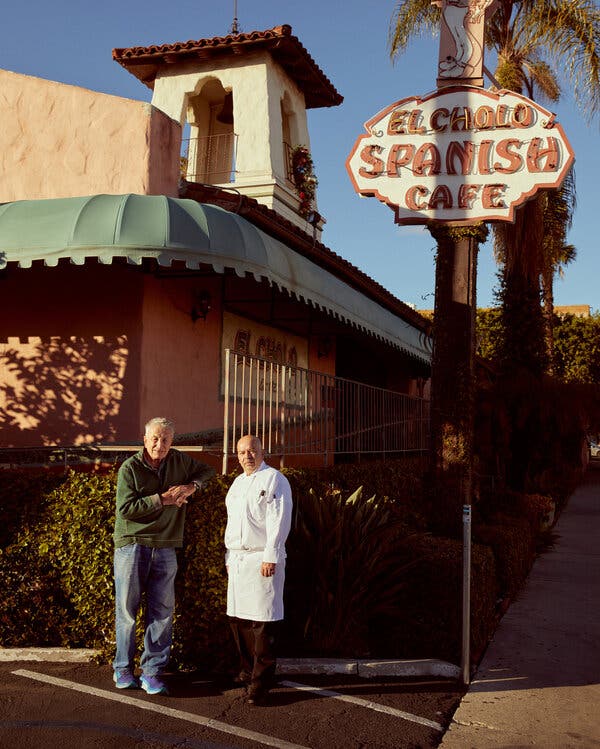 Ron Salisbury, left, the third-generation owner of El Cholo, and Gerardo Ochoa, the head chef at the flagship location.Credit…Cody James for The New York Times

Los Angeles in 1923 had just become California’s most populous city and was the hub of the upstart motion picture industry. This year will be the centennial of some of the landmarks that arose amid that boom, including the Biltmore Hotel, the Hollywood sign and the Coliseum. It will also be the 100th anniversary of a dining destination for generations of Angelenos: El Cholo.

When it was established by Alejandro and Rosa Borquez, immigrants from the Mexican state of Sonora, “going out to a restaurant was kind of a special thing — it wasn’t what it is today,” Ron Salisbury, their grandson, told me in an interview for an article published this week. “So the fact that they opened a restaurant was kind of a leap of faith.”

A branch location on Western Avenue — opened in 1927 by Salisbury’s parents — soon became the restaurant’s flagship, and Salisbury, 89, has managed the operation since 1954. As a native Southern Californian, I’ve been acquainted with it almost as long.

My mind’s eye has me in a booster seat there, and my earliest restaurant memories are tastes of El Cholo’s cheese enchiladas, with their tangy reddish-brown sauce, and of warm corn tortillas, oozing with melting butter and a bit of salt. In those Catholic days of meatless Fridays, the Mexican menu was a refuge with its chiles rellenos, rice and beans, so my mother and my older brother and I would collect Dad at his aerospace plant and head into the city. It was even worth the inevitable wait of 45 minutes to an hour — the restaurant was half its current size and took no reservations — and many walks around the block before we took our spot in one of the booths.

Now as then, El Cholo is a popular gathering spot for families, students and groups of friends. (And these days it takes reservations.) It has maintained its high profile even as the city’s Mexican food scene — including taco trucks and high-end restaurants — has elevated a wider array of regional, arguably less Americanized fare.

Josh Kun, a communications scholar at the University of Southern California and the author of “To Live and Dine in L.A.: Menus and the Making of a Modern City,” said the restaurant embodied a sort of Angeleno authenticity of its own — a “place of leveling,” where white, Latino, Black and Asian diners could find common ground.

Kun, who grew up in West Los Angeles, said El Cholo remained part of a Los Angeles family dining culture exemplified by old-school Mexican and Chinese restaurants with big tables and lazy susans — “very safe culinary places” where, whether 5 years old or a grandparent, “you could all find something on the menu you liked.”

Much has changed over the decades. The waitresses no longer wear colorful hand-sewn Mexican dresses with hoop skirts. New items have been added to the menu; a few have been retired. And as he approaches 90, Salisbury knows that more change lies ahead.

A man accustomed to “running at fifth gear,” he is preparing to pass the torch to the next generation — or two, or three. There are plans for growth, including an expansion of the main location. But the milestone year has also been a moment for introspection.

“I’ve been doing this for 69 years, and how incredible life has turned out,” he told me. “Everywhere I go, I run into people who say, ‘I love your restaurant.’ Do you know what that’s like? Can you imagine?”

Kevin McKenna is a deputy business editor for The New York Times.

The rest of the news

A 1931 Mediterranean-style house with six bedrooms, four bathrooms and a two-bedroom, two-bathroom guest apartment, on a 0.2-acre lot.Credit…LA Light

For $3.5 million: A Mediterranean-style house in Los Angeles, a three-family building in San Francisco or a five-bedroom home with a guesthouse in Alamo.

Today’s tip comes from Alison McDonald, who recommends Lassen Volcanic National Park, in the northeast part of the state:

Tell us about your favorite places to visit in California. Email your suggestions to [email protected] We’ll be sharing more in upcoming editions of the newsletter.

How is California’s intense storm affecting you? Email us with your stories and photos at [email protected].

And before you go, some good news

My colleague Melissa Kirsch created a super-specific “Best of 2022” list based on your recommendations, including the best toothpaste, seltzer flavor, bowling tip and more.

A few readers even happened on methods for dealing with insomnia. Mariana Scott of Dublin, Calif., advised a light workout in the middle of the night. “Then if you’re too exhausted to exercise during the day,” she said, “at least you already did something.”

Thanks for reading. We’ll be back tomorrow.

Soumya Karlamangla, Briana Scalia and Isabella Grullón Paz contributed to California Today. You can reach the team at [email protected].

Tags
California Restaurant That Was With