The new fall semester has just begun in Mesa, Ariz., and Westwood High School is short on math teachers.

A public school that serves more than 3,000 students in the populous desert city east of Phoenix, Westwood still has three unfilled positions in that subject. The principal, Christopher Gilmore, has never started the year there with so many math positions open.

“It’s a little bit unnerving,” he said, “going into a school year knowing that we don’t have a full staff.”

Westwood, where most students qualify for free or reduced-price lunch, is one of many public schools across the United States that are opening their doors with fewer teachers than they had hoped for. According to one national survey by Education Week, nearly three-fourths of principals and district officials said this summer that the number of teaching applicants was not enough to fill their open positions. Other surveys released this year have suggested that parents are deeply concerned about staffing and that many more teachers are eyeing the exits.

But while the pandemic has created an urgent search for teachers in some areas, not every district is suffering from shortages. The need for teachers is driven by a complicated interplay of demand and supply in a tight job market. Salary matters, and so does location: Well-paying suburban schools can usually attract more candidates.

If anything, experts say, the recent pandemic turmoil can be expected to worsen old inequities.

“It’s complex, and it does go back before the pandemic,” said Desiree Carver-Thomas, an analyst with the Learning Policy Institute. “Schools serving more students of color and students from low-income families bear the brunt of teacher shortages, oftentimes.”

For many years, it has also been particularly hard to find teachers for subjects like math and special education, or to fill spots at rural schools. And there has always been a dire need for more teachers of color in the United States. According to federal data collected during the school year ending in 2018, nearly 80 percent of public schoolteachers were white. Most of their students were not. 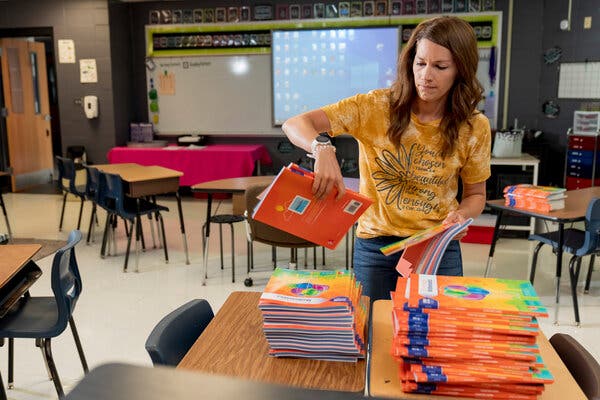 In Arizona, where starting salaries for teachers are lower than the national average, the shortages are “severe” across the board, said Justin Wing, an assistant superintendent of human resources for Mesa Public Schools, the district where Mr. Gilmore works.

“I feel like it’s been that way for probably at least 10 years,” said Mr. Wing, who is also an analyst for the Arizona School Personnel Administrators Association. But this year, he added, seems even worse.

Read More on the Coronavirus Pandemic

He attributes the problem in part to low pay, and he has watched districts in neighboring states, like Texas and Nevada, rub salt in the wound by advertising their teaching salaries on social media and on billboards along Arizona highways.

According to Mr. Wing’s data from the last school year, nearly four-fifths of teaching positions (measured in terms of full-time equivalencies) in Arizona schools had to be covered in less-than-ideal ways — by support staff, for example, or teachers in training.

And nearly one-third of positions remained vacant altogether, which often meant that existing teachers had to take on more classes.

The challenge for struggling districts is to cover positions in a way that not only fills seats but also serves students, said Tequilla Brownie, the chief executive of TNTP,a nonprofit that provides consulting services for districts on staffing and student achievement.

“Everybody right now is just talking about, frankly, warm bodies,” she said. “The quality of teachers still matters. You never will get to quality if you don’t get to quantity first.”

Over the past two years, several states including New Mexico, Florida, Alabama and Mississippi have tried to address or pre-empt shortages by raising teacher salaries.

Others have loosened certification requirements. In Arizona, a new law makes it easier for aspiring teachers without bachelor’s degrees to gain work experience in the classroom. In Florida, where state officials last year reported more than 4,000 teacher vacancies, some military veterans can be granted temporary teaching certificates.

And in some rural districts, where raises may be out of reach, school officials are putting entire school days on the chopping block.

Finding math and special education teachers has been an issue for many years. But experts said the pandemic made the problem worse. Credit…Jim Wilson/The New York Times

In Missouri, where teachers receive among the lowest salaries on average in the country, John Downs, the superintendent of the rural Hallsville School District, said that the pool of qualified applicants has all but dried up in recent years. A few days before the start of the school year, positions in speech language pathology and math were still unfilled.

This year, Hallsville schools are trying to entice educators with a four-day workweek. “We’re competing against more affluent districts who can offer more lucrative salary benefit packages,” Mr. Downs said. “So we decided we needed to think outside of the box.”

Hallsville is not alone. In Missouri, 25 percent of all districts will be on a four-day schedule this fall. The condensed week is common in New Mexico, Colorado, Oregon, Idaho and South Dakota, and is beginning to emerge in other states like Texas.

Even before the pandemic, the number of schools on the four-day model grew to more than 1,600 in 2019 from 257 schools in 1999, according to national data compiled by Paul Thompson, an associate professor of economics at Oregon State University.

“As a smaller district, we just could not compete monetarily” with larger districts, said Kate Wright, a parent of two children in elementary and middle school, who hoped Hallsville’s new schedule would draw strong applicants. “It’s kind of hard to expect a teacher to want to drive out to Hallsville for less pay.”

It remains unclear how the four-day model — which has longer school days but shorter weeks — affects learning. While children and families may benefit from the flexibility of a three-day weekend, some research suggests that student achievement can suffer if the total number of instructional hours significantly drops.

Shauna Woods, a third-grade teacher in Hallsville, said educators were looking forward to Mondays off — especially on the heels of two challenging years helping students navigate the pandemic. In anticipation of the change, she said, “the one thing that teachers kept talking about in my district was, ‘It won’t be like this next year. It will be better next year.’”

While the shortages in many districts are alarming, said Kim A. Anderson, the executive director of the National Education Association, the news has not been all bad.

“We are, in fact, making progress with respect to the educator shortage,” she said, adding that increased funding from districts, as well as the American Rescue Plan, passed by Congress in March 2021, were helping to turn the tide.

Lisa Harris, an algebra teacher at Patriot High School, in Nokesville, Va. Schools in the area have not seen the shortages that other districts have experienced. Credit…Shuran Huang for The New York Times

In Virginia, where starting salaries for teachers tend to be higher than the national average, Prince William County Public Schools, one of the state’s largest districts, offers more than $53,000 to new teachers with bachelor’s degrees. Teachers with experience or graduate degrees can make tens of thousands more.

Lisa Harris, an algebra teacher in the district’s Patriot High School in Nokesville, said she had been teaching for 22 years and has never wanted to leave the profession. “As far as teacher shortages, of course I see the news,” she said. “You hear it nationally. I know of it. But honestly, at Prince William County Schools, I don’t see a lot of that.”

In fact, many schools in Prince William County saw just the opposite. For the current school year, which began on Aug. 22, the district created hundreds of new positions for teachers and teaching assistants compared with last year.

All year round, administrators keep an eye out for potential applicants — especially those with certifications in math, science, special education and multilingual education.

“This is a joke among those of us that work in H.R.,” said Michelle Colbert, who works in human resources at the district. “When you go to a college fair, and you see one math candidate, then it’s like every person in the room is making their way to that candidate.”

In fact, in some districts, teacher vacancies can be attributed not only to turnover but also to the creation of new positions, said Richard Ingersoll, an expert on education staffing with the Graduate School of Education at the University of Pennsylvania.

That can skew perceptions of shortages, especially in the context of long-term trends. The total number of people working in public education has mostly grown for about a decade, federal data show, partly in recovery from widespread losses after the 2008 recession. And the number of teachers has grown faster than the number of students, Dr. Ingersoll’s research has found.(That may continue. Student enrollment slumped during the pandemic, and it may continue to shrink in coming years because of demographic changes.)

But in places with chronically low pay, the pandemic has only worsened teachers’ feelings of being undervalued, said Brent Maddin, who leads the Next Education Workforce initiative for teachers atArizona State University. “If we’re serious about recruiting people into the profession, and retaining people in the profession, in addition to things like compensation we need to be focused on the working conditions,” he said.

As the fall semester begins, principals like Mr. Gilmore in Mesa are focused not only on filling open positions, but also on keeping the educators they have. Westwood could use three more math teachers, but 23 of them are already there, introducing students to the basics of algebra, geometry and trigonometry.

Mr. Gilmore has also been working with Dr. Maddin at Arizona State to implement a teaching model where educators with different skills work together to teach larger groups of students. The program, Mr. Gilmore said, allows student teachers — potential future applicants — to gain experience at the school, and it may also help experienced educators feel less isolated in the classroom.

“I think the pandemic just brought exhaustion to an already stressed field,” Mr. Gilmore said. “And when we bring that joy of teaching back, the students will have the joy of learning.”