SEOUL — North Korea launched two cruise missiles early Wednesday in its first weapons test in more than two months as South Korea and the United States geared up for joint military exercises that had been pared down or canceled in recent years.

The two missiles were fired off the west coast of North Korea, according to the South Korean Defense Ministry. It was the North’s first test since June 5.

It also came two days after President Yoon Suk-yeol of South Korea, as his predecessors have, offered economic ​incentives if the North ​took steps toward eradicating its nuclear arsenal. North Korea has not formally responded to Mr. Yoon, and it was unclear whether the launch​ had anything to do with his offer, which he unveiled in a speech Monday.

Since his inauguration in May, Mr. Yoon has vowed to strengthen military ties with the United States to counter the nuclear threat from the North, reinstating and expanding military exercises that were suspended as part of former President Donald Trump’s ultimately failed outreach to North Korea’s leader, Kim Jong-un.

Preliminary drills began this week for the first major exercise under Mr. Yoon and President Biden, an 11-day run set to begin Monday. 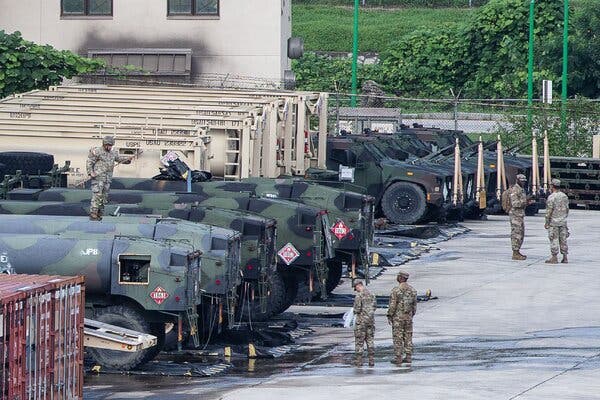 A preliminary drill with South Korean troops at the American base in Dongducheon, South Korea, on Wednesday.Credit…Yonhap, via EPA, via Shutterstock

North Korea has condemned past exercises as a rehearsal for invasion and has often countered them with its own military drills or weapons tests. South Korean and American officials have warned for weeks that North Korea is ready to restart its nuclear tests in an underground testing site at the country’s northeastern corner.

The Ulchi Freedom Shield, as the U.S.-South Korean exercise is called, follows a drill by the United States, South Korea and Japan. In their first such exercise since 2017, they conducted a joint missile warning and ballistic missile search and tracking exercise off Hawaii last week, part of efforts to deal with the growing threat from North Korea.

During the campaign for South Korea’s presidential election in March, Mr. Yoon harshly criticized the policy of his predecessor, Moon Jae-in, of promoting dialogue with North Korea, calling it appeasement and a failure. But since taking office, Mr. Yoon has also dangled economic incentives for the North to denuclearize.

“The audacious initiative that I envision will significantly improve North Korea’s economy and its people’s livelihoods in stages if the North ceases the development of its nuclear program and embarks on a genuine and substantive process for denuclearization,” Mr. Yoon said on Monday during a speech celebrating National Liberation Day, a day observed in both Koreas to mark the end of Japanese rule in 1945.

Mr. Yoon said his plans would include assistance for power generation, modernization of ports and airports in North Korea, as well as programs to boost agricultural productivity.

A television news report of Wednesday’s missile launch that used an image of a previous North Korean test, in Seoul on Wednesday.Credit…Chung Sung-Jun/Getty Images

“We don’t insist that North Korea should first denuclearize completely before we will do anything,” Mr. Yoon said in a news conference on Wednesday. “If North Korea demonstrates a firm will to denuclearize, we will do what we can.”

Mr. Yoon’s aides said that early-stage assistance could include a “resources-food exchange program” in which South Korea would ship food in exchange for North Korean coal and other minerals.

The kind of economic help Mr. Yoon envisions for North Korea can be possible only when the United Nations lifts sanctions on the North. Mr. Yoon’s office said that it had been consulting with the Biden administration, including over the possibility of easing sanctions, while it was working on his North Korea initiative.

Multiple rounds of talks between Washington and Pyongyang have all broken down while sorting out such details as what actions North Korea should take to demonstrate its willingness to negotiate away its nuclear arsenal and when the United Nations should lift sanctions.

Since his diplomacy with Mr. Trump collapsed, Mr. Kim has shown little interest in giving up his nuclear arsenal but instead has vowed to expand it.

“It is true that we urgently need an external environment favorable for the economic construction but we can never sell our dignity which we have so far defended as valuable as our own life, in hope for brilliant transformation,” he said during a Workers’ Party meeting at the end of 2019.