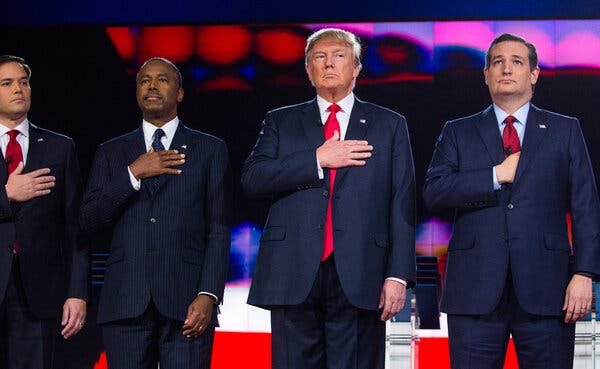 The Coming Year of Republican Drama

Good morning, everyone! I’m finally back from a few weeks abroad and excited to get back in the swing of things. I hope you had a great holiday season.

The start of an odd-numbered year is always an odd period for political analysts. We’re still litigating what happened in the last election, and yet it’s already time to look ahead to the next campaign. This year, the pivot from one election to the next is going even more slowly than usual.

The Republican primary campaign hasn’t really gotten underway. By the end of January in 2019, a half-dozen Democratic candidates had entered the fray. This time, only former President Donald J. Trump has formally announced, and I wouldn’t say he “entered the fray.” There isn’t a fray if you’re alone in the arena.

We did at least get a bit of January drama in lieu of a presidential race: the most rounds of voting for House Speaker since before the Civil War.

Kevin McCarthy’s slog to the speakership was a fitting enough way to start the year. No, it’s not a half-dozen entrants to a presidential primary. But it’s still Republican infighting — and Republican infighting promises to be the political story line of the year, whether it’s in Washington or on the presidential debate stage (assuming that President Biden seeks the Democratic nomination without a serious contest).

It has been a few years since Republicans have held center stage in such drama. The last year might have been 2017, before Mr. Trump established his dominance over the Republican Party and inaugurated an era of relative peace and unity — something like a conservative Pax Romana or Pax Britannica.

But Mr. Trump’s dominance appears to be waning, and the fault lines and fissures of a still deeply factionalized Republican Party are being gradually re-exposed.

This year, one of our biggest tasks will be to survey the newly revealed Republican landscape. This is not necessarily an easy assignment. In some ways, Republicans are a tougher challenge for political analysts than Democrats, who can usually be analyzed on a simple ideological spectrum or with the readily available demographic traits of members or their supporters, like race and education.

The same can’t always be said for Republicans, a majority of whom are white conservatives. I do think educational attainment will be a central dividing line in this year’s Republican primary electorate, but good luck capturing the difference between Mr. McCarthy and the Freedom Caucus leader, Scott Perry — two conservative, California-born whiteChristians from evangelical denominations, ages 57 and 60 — based on demographics or their positions on the issues. It’s not Joe Biden versus Alexandria Ocasio-Cortez, that’s for sure.

The old ways of thinking about the Republican Party may not be so useful anymore. In that regard, this month’s fight for House Speaker — which was eerily reminiscent of Obama-era fights between House leadership and the Freedom Caucus — may prove to be somewhat misleading. The pre-Trump Republican Party will not be making a comeback in most other respects. Carthage didn’t make a comeback with the decline of Rome, and Jeb Bush, John Kasich, Paul Ryan, Liz Cheney and a pathway to citizenship for undocumented immigrants won’t be making a comeback in 2023, either.

Instead, 2023 offers opportunities for new players — most obviously Florida’s governor, Ron DeSantis. And those new players on the national stage will mean a new set of hard-to-predict issues and fault lines. After so many years when Republicans were allied with Mr. Trump or else cowered on the sidelines, it is not at all obvious how Republican Party politics will scramble and realign if and when a vigorous challenge to Mr. Trump emerges.

It’s not obvious how a challenge to Mr. Trump will divide the Republican electorate, either. For all we know, Mr. DeSantis might run at Mr. Trump from his right and attack him for bringing Dr. Anthony Fauci into our lives and the vaccine into our bodies. Maybe he’ll blame Mr. Trump’s trillion dollar coronavirus spending packages for bringing about inflation. Exactly how Mr. Trump might go after Mr. DeSantis is a mystery in its own right.

It may not all add up to a “new era” of American politics or anything quite so grandiose. Mr. Trump could still win the Republican nomination again. But this year could look pretty different than what we’ve gotten used to over the last half decade. We’ll have our work cut out for us in the new year.

Tags
New President This Will Year