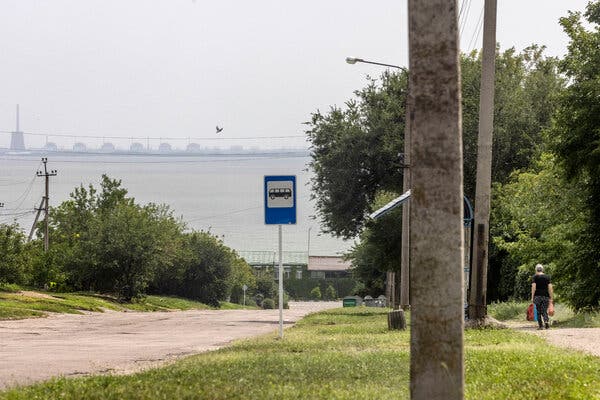 Shelling around the Zaporizhzhia power plant has raised fears of a catastrophic nuclear accident.Credit…David Guttenfelder for The New York Times

Russian artillery strikes continued near the Zaporizhzhia nuclear plant in Ukraine yesterday as negotiations continued over allowing international inspectors to visit the complex.

The International Atomic Energy Agency, the U.N.’s nuclear watchdog, has assembled a team of experts with the hope that they will visit the plant in southern Ukraine “in the next few days,” officials said. They would assess physical damage, determine whether safety and security systems are functional and evaluate working conditions, the agency said.

But as talks continue, a possible crisis looms. Increased barrages near the plant struck towns, ammunition dumps and a Russian military base in intensive fighting yesterday, raising questions about whether the area would ever be secure enough to allow inspectors anywhere near the plant.

Background: Russia and Ukraine have acknowledged the risks of a potential nuclear accident at the plant, the largest power station in Europe, but neither appears to be pausing attacks. And for weeks, the countries have blamed each other for firing artillery at the nuclear plant.

Details: Ukrainian officials have rushed to hand out potassium iodide to tens of thousands of people living near the plant. The drug can protect people from radiation-induced thyroid cancer.

“It feels sometimes that my mere existence is a provocation to some,” Sanna Marin said last year.Credit…Saara Mansikkamaki for The New York Times

Sanna Marin, Finland’s 36-year-old prime minister, is engulfed in a scandal after videos of her dancing at a party were leaked this month.

The conflict, my colleague Katrin Bennhold reported from Helsinki, is at the heart of the country’s identity shift to becoming a beacon of progressive modernity. Some Finns are clamoring for Marin’s resignation, arguing that her conduct is unbecoming of a prime minister. Others see her as inspirational.

The issue has also raised the question of whether Marin is held to a different standard than older male leaders. “This hurts a certain type of elderly man,” said Tarja Halonen, who was Finland’s first female president. “They are afraid of the situation — that it’s more and more normal that women of all ages take political roles and that women are now more the rule than the exception.”

Context: Even by Finnish standards, Marin is exceptionally young and her government exceptionally female. When she took office in 2019, at 34, she was more than 20 years younger than her two immediate male predecessors when they entered office.

Legacy: Marin has guided Finland through the coronavirus pandemic with one of Europe’s lowest death rates. After Russia invaded Ukraine, she traveled to Sweden to win support for Finland’s and Sweden’s momentous bid to join NATO.

“This is a violation of minority rights,” Vucic acknowledged, “but at this moment, the state is pressured by numerous problems.” He cited tensions with Kosovo, economic problems and concerns about anti-gay protesters.

The announcement shocked organizers, who vowed to go ahead with the festivities, planned for Sept. 12-18. They said they were prepared to start a legal challenge and that a cancellation would violate their rights of freedom of assembly and expression, detailed in the Serbian Constitution and protected by European human rights law.

Background: EuroPride is a weeklong festival that has been held since 1992 in a different European city each year. More than 15,000 people, many traveling from abroad, were expected to attend the event in Belgrade, which would have culminated in a Pride march.

Context: Belgrade’s bid to host EuroPride had been supported by Serbia’s prime minister, Ana Brnabic, who is the first woman and first openly gay person to hold that position. It would have been Serbia’s first year hosting the event.

But the project is threatened by a ballooning budget and rushed construction over fragile terrain. Even though it may be hurtling toward disaster, he refuses to slow it down.

The wildest transfer saga in soccer history: Portuguese midfielder Luís Figo went from hero to traitor at Barcelona when a world record transfer fee took him to rivals Real Madrid in 2000. Relive the full story.

Why are the biggest clubs in world soccer now spending big on players over 30? Conventional wisdom always meant that clubs would scour the globe looking for the hottest young stars for relatively cheap. But these days, it seems, there’s no substitute for experience.

The 100 goals scored by Liverpool’s unassuming hero: Superstars Mohamed Salah and Sadio Mane dominated the headlines while Liverpool racked up the trophies over the previous five years. But now Roberto Firmino is in the limelight after bringing up a century of strikes.

Climate change is making the Middle East and North Africa hotter and drier. Clouds have emerged as a new battlefield in the scramble for fresh water.

Countries across the region are turning to “cloud-seeding,” an unproven process of injecting chemicals into clouds to try to force precipitation. (The science is complicated, but the basic idea is to make water molecules heavy enough that they fall as rain.)

The United Arab Emirates is the undisputed leader: After 20 years of research and experimentation, the country runs its program with near-military protocols. Nine pilots rotate on standby, ready for meteorologists to spot a promising weather formation.

Other countries are racing to catch up, sometimes accusing one another of stealing water. And the process is complicated, imprecise and hotly debated in the scientific community: There are serious questions about whether the technique generates enough rainfall to be worth the effort and the expense.

Melissa Clark’s creamy peach pie bars are a cross between a cheesecake and a juicy pie.

Here’s today’s Mini Crossword, and a clue: “A bird, a name, a letter” (three letters).

And here’s today’s Wordle and the Spelling Bee.

That’s it for today’s briefing. Thanks for joining me. — Amelia

P.S. Azmat Khan, whose reporting was part of our Pulitzer Prize win for reporting on civilian casualties from airstrikes, is joining The Times.

The latest episode of “The Daily” is on U.S. student loan forgiveness.

4 hours ago
Check Also
Close
You need to set the Weather API Key in the theme options page > Integrations.
Follow Me