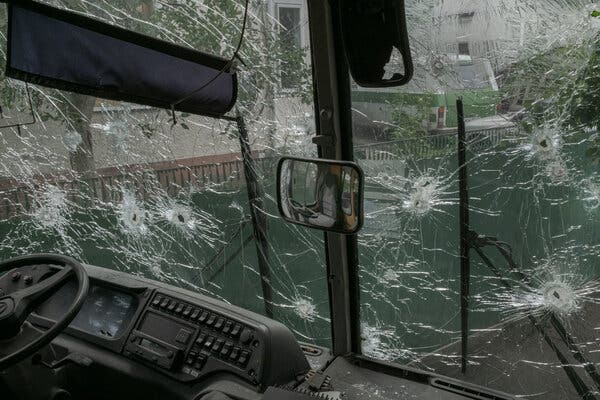 A destroyed school bus in the rural Ukrainian village of Vilkhivka, which Russian forces occupied in the spring.Credit…Mauricio Lima for The New York Times

Hundreds of Ukrainian civilians, mainly men with military experience or of fighting age, have disappeared since the war in Ukraine began in February. In some cases, they have been detained by Russian troops or their proxies, held in basements, police stations and filtration camps in Russian-controlled areas of Ukraine and ended up incarcerated in Russia.

In interviews with The Times, detainees detailed how they were shunted from one place to another, beaten and repeatedly subjected to electrical shocks under interrogation. Others were shot, they said. No one knows exactly how many people have been sent to Russian jails, though the U.N. has documented 287 cases of enforced disappearances and arbitrary detentions and says the total is almost certainly more.

One former detainee said that interrogations digging for information on Ukrainian positions and military groups were often pointless, as physical force would be used before he could answer a question. “They don’t believe anything you say, even if you’re telling the truth,” he said. “You cannot prove your innocence.”

In other news from the war:

Supporters of William Ruto celebrating his victory yesterday in the Kenyan town of Eldoret, one of his strongholds.Credit…Brian Inganga/Associated Press

William Ruto, Kenya’s former vice president, was declared the winner yesterday in the country’s presidential election, apparently ending an unpredictable, neck-and-neck battle that had millions of Kenyans eagerly watching as the results rolled in. Read our profile of Ruto.

Kenya’s last three elections were marred by disputed results that led to court cases and street violence. Those crises had prompted the electoral commission to go to extraordinary lengths to ensure a clean vote this time — it posted images on its website showing the results from more than 46,000 polling stations. But the losing candidate, Raila Odinga, rejected the result even before it was announced. His top aides said the election had been “mismanaged” and called on those in charge to be arrested.

After a winner was named, pandemonium erupted in the hall where the votes had been counted, sending chairs and fists flying. Four of the seven electoral commissioners refused to verify the vote and stormed out, casting doubt on a result that is almost certain to end up in court. Odinga plans to address the nation today, a spokesman said.

A clinician preparing doses of Moderna’s Covid vaccine at a vaccination center in London in December.Credit…Daniel Leal/Agence France-Presse — Getty Images

Britain became the first country yesterday to authorize a coronavirus vaccine that targets two variants, the original virus and Omicron, the variant that became dominant over the winter. Half of each dose of the Moderna-made vaccine will target the original variant, and the other half will target Omicron.

In a statement, Moderna said that it was working with British health officials to distribute the new vaccine. It was unclear when the shots would be available to the public. The drugmaker said it had completed regulatory submissions for the vaccine in Australia, Canada and the E.U. It expected further authorization decisions in the coming weeks.

Results: In clinical trials of adults, researchers found that the vaccine, an updated version of Moderna’s original Covid shot, generated a good immune response to the two variants, as well as to the BA.4 and BA.5 subvariants.

Credit…Illustration by The New York Times

Worker productivity tools, once common in lower-paying jobs, are being used for more white-collar roles. Companies say the tools can yield efficiency and accountability. But in interviews, workers described being tracked as “demoralizing,” “humiliating” and “toxic.”

In one case, employees who forgot to turn on their time tracker had to appeal to be paid at all. “You’re supposed to be a trusted member of your team, but there was never any trust that you were working for the team,” one former executive said.

A recent trend in entertaining challenges what a table — and the food on it — should look like and do, Alice Cavanaugh reports for T Magazine.

The new dinner party doesn’t just feature delicious food: It might be immersive, and even slightly surreal. “Gone, or at least sidelined, are flowers and china; in their place is an upending of the very idea of decoration,” she writes. Think blocks of couscous and bulgur recalling the faded splendor of ancient ruins, or trees made from asparagus and langoustines.

Treating food as ornamentation has a long historical precedent. In ancient Greece, the banquet was a way of impressing others with one’s wealth and status. And in 1932, the controversial Italian poet and art theorist Filippo Tommaso Marinetti, who founded the Futurist movement, described how the presentation of food should delight all five senses.

Read more about the art of the tablescape.

This simple pasta comes together with a trifecta of juicy tomato, creamy goat cheese and salty Parmesan.

Our action movie picks include one about corrupt systems and another that’s a fun-loving superhero B movie.

World Through a Lens

And here’s today’s Wordle and the Spelling Bee.

That’s it for today’s briefing. Thanks for joining me. — Natasha

P.S. The Times’s Pam Belluck won the Victor Cohn Prize for Excellence in Medical Science Reporting for her coverage of Covid-19.

The latest episode of “The Daily” is about a U.S. tax loophole for a select group on Wall Street.

59 mins ago
Check Also
Close
You need to set the Weather API Key in the theme options page > Integrations.
Follow Me